In the traffic this morning, I was saddened to learn of the death of Margaret Legum.

Margaret was an advocate for new economics. Her columns in newspapers provided a rare view that we could be doing better, and a view completely “out of the box”. In fact, her book is titled It Does Not Have to Be Like This.

Her influence as a commentator and columnist was immense, but her work in promoting a different view of economics in civil society was what distinguished her work. As founder, and chairperson of the South African New Economics Network (known by the catchy acronym SANE) she and her colleagues provided important ideas on how we could make South Africa more equitable. Her ideas resonate throughout civil society, which has many passionate advocates of the ideas of SANE.

I admit, while I always liked what she wrote, I often wondered if they were just wonderful ideas that would never see the light of day. Yet, in various meetings I become convinced that new economics not only was a fresh perspective, but that its advocates had the tactical sense to relate their ideas to campaigning and advocacy work in civil society. It is because of these interactions between ideas and practice that new economics has moved from some peripheral idea to having a wider support base, particularly in NGOs, churches and unions.

I think Margaret would embrace the thought that, ideas live on much longer their creators and advocates. 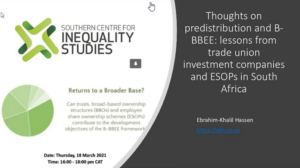 Thoughts on predistribution and B-BBEE: lessons from trade union investment companies and ESOPs in South Africa